As the door closed behind her, Rowena looked around and discovered that she was standing on a station platform.

“All aboard” shouted the squirrel, but Rowena couldn’t see a train. Instead, in front of her were five birds’ nests, neatly woven from twigs and with two mossy green seats inside each one. A sort of umbrella made of ferns hung over them to form a roof and they were joined together by silken ropes.

“Jump in!” said the fairy and Rowena followed her into the first carriage. Rowena noticed several more fairies climbing into the other carriages.

“Fasten your seat belts!” called the squirrel and the fairy showed Rowena how to tie the pink satin ribbons round her waist. The squirrel blew his whistle and waved his flag and the carriages began to move.

“The fairy railway is like your trains” explained the fairy. “You can get on at any station and all the carriages go to Fairyland. It works by magic (and fairy dust of course).”

“What is fairy dust?” asked Rowena.

“It is the wonderful secret thing that helps fairies to make magic” explained the fairy. “We fairies collect the ingredients at twilight when the stars begin to twinkle and we store it in bottles so that we can use it to make wishes come true. It is made from all sorts of lovely things like stardust, moonbeams and the scent of flowers, babies’ smiles and giggles and the soft white feathers which fall from doves as they fly home to roost, icing sugar and candyfloss, summer breezes and snowflakes, kisses and kindness.”

Now the carriages began to speed up and Rowena saw that they were travelling along a silver track through the clouds. Up and down they went, twisting and turning, like a fairground ride. It was great fun and several times Rowena’s tummy gave a leap as their carriage bounced along. Suddenly they entered a tunnel and tiny sparkling lights appeared in the roof of the carriage. Rowena was admiring them when the carriage slowed down and came to a stop at another station. “Is this Fairyland?” she asked.

“Next stop” replied the fairy as they waited for more fairies to join the fairy railway.

“Please may I ask you a question?” said Rowena politely. “What is your name?”

“Oh!” laughed the fairy, “didn’t I introduce myself? I am Leila, the Ladybird Fairy. It is my job to help the ladybirds and that is why I was so worried when you upset the ladybird at your school by repeating that silly nursery rhyme. All the fairies have a special job; some of us look after the animals, birds and insects while some of us care for the flowers and plants. Other fairies are busy looking after babies and little children like you. Each baby is given its own fairy to watch over it.”

“Did I have a fairy when I was a baby?” asked Rowena.

“Of course!” replied Leila, “but I don’t expect you have ever seen her. She is called Crystal and she is still your fairy. I will take you to meet her when we have made sure that the ladybird isn’t worried about her children.”

“Does Ruth have a fairy too?” Rowena wondered.

“Yes, she is called Sparkle and we can meet her too” replied Leila. “Most fairies are very shy so you don’t often see them, but they love children and it is considered a great honour for them to be invited to live with their own child. If you invite your own fairy into your home and fix a fairy door with a key and some fairy dust AND YOU ARE VERY GOOD your own fairy will be able to live with you and travel to and from Fairyland. I will tell you more about it when we meet Crystal.” 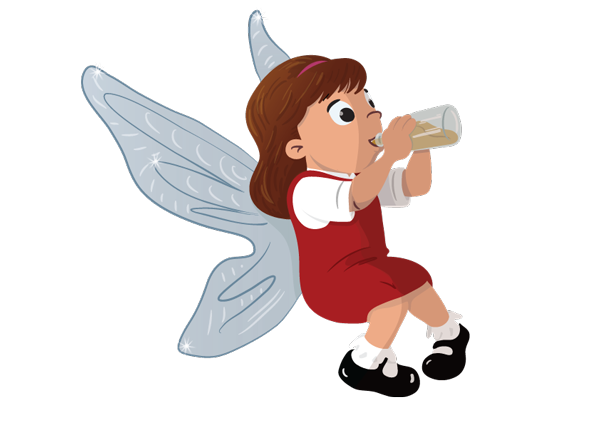 Just then the carriages began to move again. Rowena was having such fun that she had forgotten she felt thirsty but Leila took two little bottles out of her pocket and offered one to Rowena. “Drink it up, it’s nectar” she said, and Rowena found it was the most delicious drink she had ever tasted.

This adventure was getting better and better!