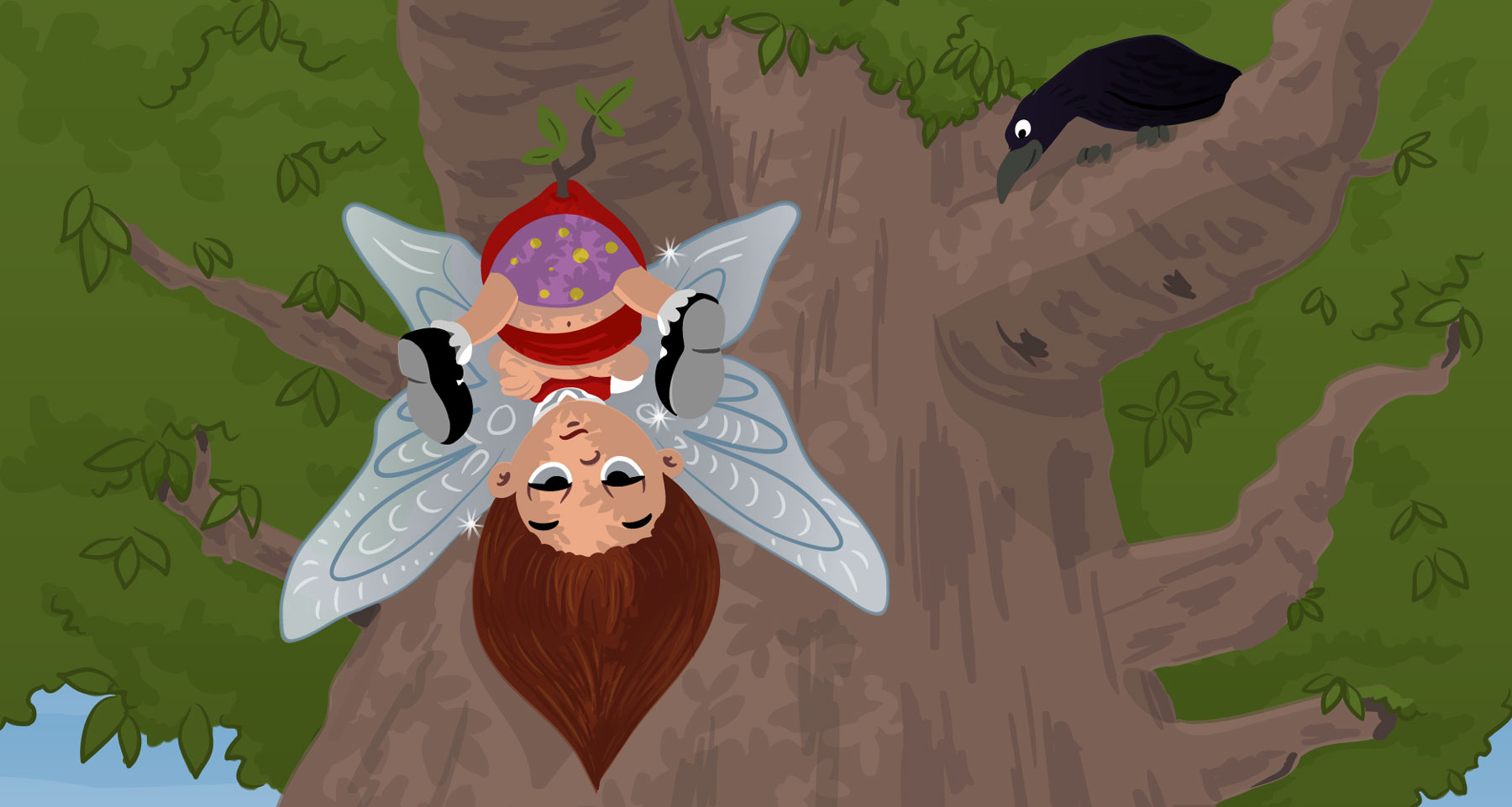 Flying was the most wonderful thing that Rowena had ever done. She didn’t feel at all scared, only excited and happy. She felt that she didn’t have to think about how to fly; the fairy had said ‘just believe’ and it had happened naturally. They flew up through the branches of the beech tree, the fairy holding Rowena’s hand tightly. “Don’t let go” called the fairy. “You need to get used to flying before you can do it on your own.” “It’s OK” said Rowena, “I can do it.” She pulled her hand away from the fairy. “Look” cried Rowena, “I can fly!” And she darted away like a butterfly wearing school uniform! “Be careful!” shouted the fairy. “Look where you’re going.” But it was too late. Rowena collided with a branch and her dress got caught on a twig. “Help!” she yelled as she hung upside down, her legs kicking and her wings fluttering uselessly. “I’m stuck!” A huge crow with glossy black feathers flew down and settled on a branch above Rowena. “Who are you? What are you doing up here?” it cawed. “Don’t ask silly questions” said Rowena crossly. “If you can’t help me, leave me alone.” The fairy landed on the branch next to the crow. “Don’t worry, Cuthbert Crow” she said. “This is Rowena and she has only just got her wings. She needs to learn how to fly safely.” Cuthbert Crow cawed again and bent his head towards Rowena. His grey beak looked enormous and sharp and suddenly Rowena did feel scared. “Help me, fairy!” she shouted. “He’s going to peck me!” “Don’t make such a fuss!” laughed the fairy as Cuthbert Crow gently lifted Rowena free and set her down on the branch next to him. “Oh, thank you” whispered Rowena, feeling rather embarrassed and ashamed that she had been disobedient. The fairy made Rowena sit next to Cuthbert Crow while she gave her a flying lesson. After she had explained what to do, the fairy asked Rowena to turn and hover, go forwards and backwards, up and down, swerve and do somersaults. “That’s better” said the fairy. “Now we can be on our way, if you promise to be careful and always look where you are going.” “I promise” said Rowena. “Goodbye, Cuthbert Crow; thank you for helping me.” Rowena followed the fairy higher and higher, through the rustling leaves of the beech tree towards the sunlight. At the very top of the tree the fairy alighted on a branch and beckoned to Rowena who landed next to her. She parted the leaves and there to her astonishment Rowena saw a little door, just like the one at the base of the tree where she had first met the fairy. “Is this the way into Fairyland?” asked Rowena. “It is one of the ways” replied the fairy. “There are doors into Fairyland all around you; you just have to know how to find them.” The fairy knocked softly and the door was opened by a squirrel wearing a uniform and holding a whistle and a flag. 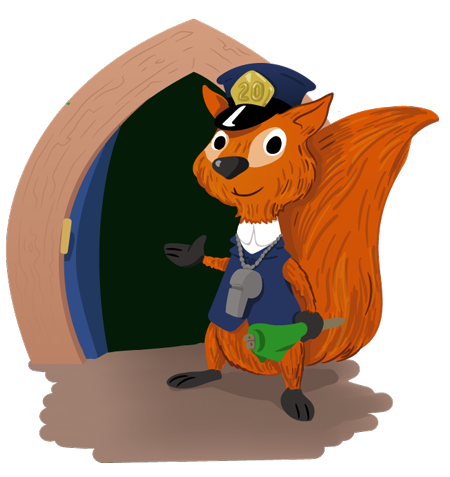 “Come in, come in” chattered the squirrel. “You’re just in time.” “What does he mean? Just in time for what?” asked Rowena. “You’ll see” said the fairy, and she led Rowena through the door.