Now the fairy railway began to climb up the side of a steep mountain and soon Rowena gave a shiver. “Here” said Leila the Ladybird Fairy, “wrap yourself in one of these” and she pulled out two thistledown shawls from a drawer under her seat.

Rowena thanked the fairy. “Now I’m as warm as toast” she smiled, tucking the shawl round her knees and making sure she didn’t damage her wings.

“Toast!” cried Leila, “What a good idea!” and she reached into the drawer again and brought out slices of warm golden toast, dripping with butter. The two little fairy girls ate every scrap and licked their fingers.

At the very top of the mountain the carriages stopped for a moment and Rowena could see the whole of Fairyland laid out below. It was so beautiful! There were woods and meadows, lakes and rivers, little fields and paths, all peaceful under a blue sky with fluffy white clouds drifting along. In the centre was a little town with a station and beneath a hill just beyond was a pale pink castle with turrets and towers. One tower was much taller than the rest and a golden flag fluttered above it. “That is where we store the fairy dust before we put it into the bottles” said Leila. “Hold tight now” she cried. “Here we go!”

The carriages shot forward and whizzed down the mountain at top speed. The wind whistled in Rowena’s ears and she screamed with excitement. It was such fun that she didn’t want the ride to end, but soon they reached the station where another squirrel helped them to fold their shawls and untie their seatbelts.

“Welcome to Fairyland” smiled Leila. “Let’s go and find the ladybird.” They held hands and flew out of the station, past a busy market place which was full of fairies and over a little stream towards a wood. “There she is!” Leila called.

Rowena looked down and saw a mummy ladybird on a tree stump, surrounded by little ladybirds. She was holding a frying pan!

The two little fairy girls landed softly on the grass and Leila gently stroked the mummy ladybird’s glossy spotty back. “This is Rowena and she is really sorry she upset you” said Leila. “Did you find your children?”

“All save the youngest, her name is Anne” said the mummy ladybird. “I’ve looked under the frying pan but she isn’t there. And my house wasn’t on fire!” 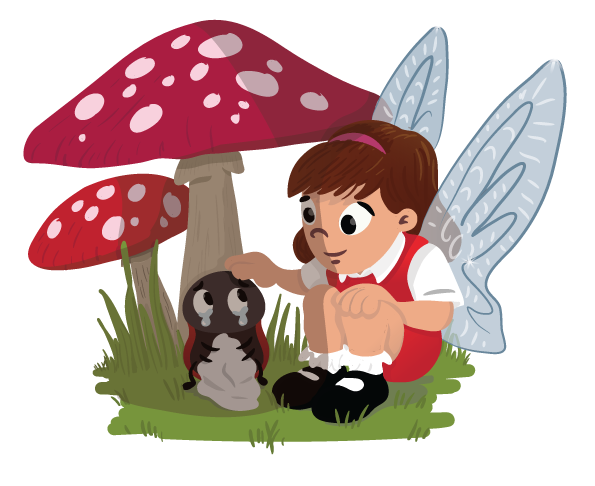 “Oh dear” said Rowena. “I really am so sorry about the nursery rhyme. I’ll never say it again. Now I’ll help you find Anne” and she flew up and down calling Anne’s name. Soon she spied a red and black spotty shape and swooped down to find a little ladybird sitting under a toadstool and crying into a big hankie. “I can’t find my mummy” sobbed the ladybird. “I was supposed to stay at home with my brothers and sisters but I ran off to play hide and seek with Miranda the Mischievous Fairy and I got lost.”

“Is your name Anne?” asked Rowena.

“Yes” sniffed the little ladybird. “How did you guess?”

“Come with me” said Rowena. “I know where your mummy is” and she led the ladybird back to where her mummy and her brothers and sisters were waiting. There was lots of hugging and kissing and the mummy ladybird thanked Rowena again and again.