“Well,” said the fairy. “I think you had better come with me to apologise to that poor ladybird and make sure she has found her children.” “But I’m only a little girl. My Mummy won’t let me go off with a stranger,” said Rowena, even though she desperately wanted to go with the fairy. “Of course!” cried the fairy. “I know that! Your Mummy is very sensible and I would never put you in danger. However, fairies have special rules and we have fairy time, which means we can go to Fairyland in the twinkling of an eye and be back before anyone knows you’ve gone! When your Mummy was a little girl she probably visited Fairyland but when little girls and boys grow up they are so busy looking after their own children that they usually forget about it. Now, close your eyes; I’m going to sprinkle you with fairy dust.” Rowena squeezed her eyes tightly and as she did so she heard a sound like a hundred tiny bells tinkling. Her arms and legs began to tingle and her head felt as though it was spinning. There was a whooshing sound and then Rowena heard the fairy shouting “Come on! Open your eyes now!” Rowena peeped out from under her eyelids and what she saw made her squeal with excitement. She had shrunk to the size of the fairy, who was flying round her and calling “Hurry up, Rowena.” “How do you know my name?” asked Rowena. “I know the names of all the children at your school” replied the fairy. “I watch you all at playtime. I know you and your sister Ruth and all your friends. I know you are really a kind child and that is why I am taking you with me to Fairyland to find the ladybird.” “How can we get to Fairyland”’ asked Rowena. “You must believe” said the fairy. “First of all I will give you a pair of wings and then we’ll be off at once.” She took Rowena by the hand and they walked around the tree until they came to a spider’s web. In the middle of it sat a huge spider, nearly as big as the fairy and Rowena. “Oh help!” cried Rowena, trying to hide behind the fairy. “I don’t like spiders!” “Charming!” said the spider. “What a rude girl! I’m not exactly fond of you, either.” The fairy frowned at Rowena. “You must stop upsetting the creatures,” she scolded. “The spider might not look pretty to you but she can make the most beautiful things. I was just about to ask her to make you some gossamer wings.” 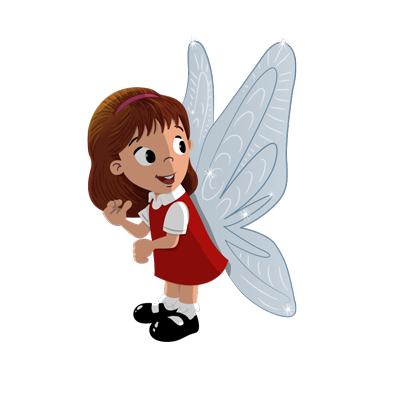 Rowena apologised to the spider. “I’m very sorry” she said, “I didn’t mean to be rude.” She watched in amazement as the spider began to pull silk from her abdomen and spin it into a beautiful and delicate pair of wings. When the wings were ready the spider fixed them gently onto Rowena’s shoulders and the fairy sprinkled them with more fairy dust. Rowena felt the wings begin to flutter. The fairy held her hand and they flew up into the air, waving goodbye to the spider. Rowena could hardly believe it! She was on her way to Fairyland.