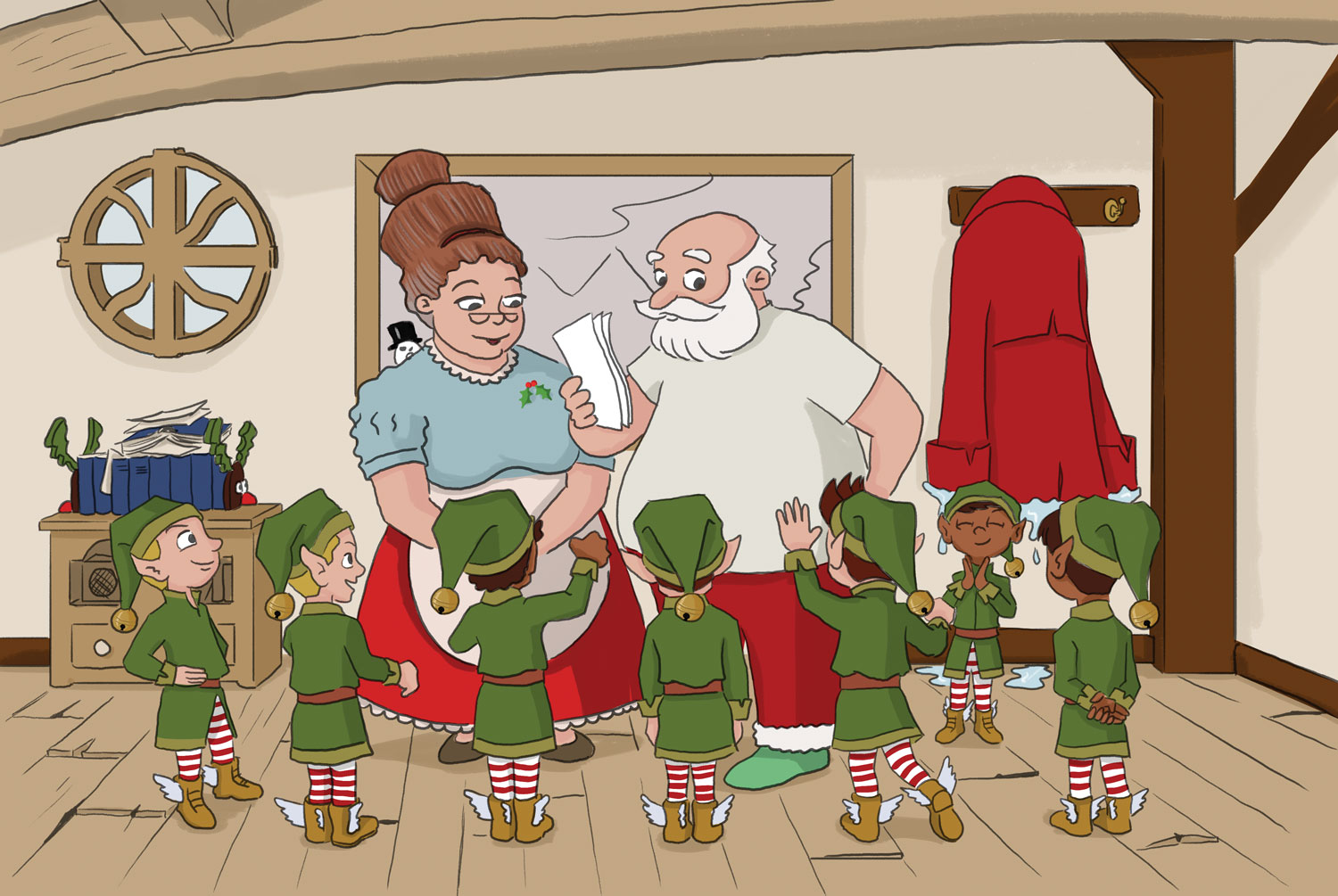 Santa Claus opened the box and took out the Fairy Door.

“It must be a magic door,” he said. “It looks just like the little doors my elves use when they go to investigate whether children have been good enough to get any Christmas presents.”

Sure enough, on the opposite wall of Santa’s workshop was a neat row of little red and green painted wooden Elf Doors, each with a round door knob. On every door hung a Christmas stocking filled with presents and candy canes.

While Santa Claus fixed the Fairy Door to the workshop wall, Mrs Claus sat down and wrote a letter.

Dear Fairy,
I would be very happy if you could come and help me here at the North Pole. I have a lot of cleaning and tidying to do as it is nearly Christmas and Santa Claus has made such a mess in his workshop. Also the elves who help him at Christmas are always asking for fairy cakes and I don’t have time for baking.
Yours sincerely,
Mrs Claus
xxxxxxx

Mrs Claus left the letter on the floor next to the Fairy Door, together with the tiny silver key that Santa had found in the box, and Santa sprinkled them with fairy dust from a little bottle, just to help the magic.

“Have you got enough fairy dust left for tonight?” asked Mrs Claus. “Remember you will need it to make yourself small enough to fit down the chimneys when you are delivering presents, or to get into houses that don’t have chimneys.”

“Don’t worry dear!” replied Santa. “I have asked the Fairy Queen to send me some more. Perhaps your own fairy will bring it!”

Suddenly Santa and Mrs Claus heard chattering and laughter as the little red and green Elf Doors burst open and in rushed a crowd of elves. Each elf wore a green velvet jacket with a pointed collar and a brown belt with a gold buckle. Their trousers had red and white stripes round them and they wore pointed brown boots with little gossamer wings on the back. Perched on top of their spiky brown hair were little green caps with jingling bells. The elves were singing a happy little song as they hurried up to Santa:

“Through the elf doors here we come with news of girls and boys.
We can tell you who’s been good and who deserves some toys!”

The elves crowded round Santa as he ticked off the names of the good children on his list.

“Thank you,” said Santa. “All these children have been very good, but have there been any naughty ones?” One of the elves spoke up:

“Just a few were mean or rude, they must learn to be good.
Cross them off your present list and the lesson will be understood!”

“There are still a few hours left before I deliver the Christmas presents,” said Santa kindly. “Let’s give those children a chance to prove that they can be good. Please keep an eye on them and let me know if they are naughty again.”

“I would also like one of you to check on the child who sent this letter,” and Santa read out the letter from the child who wanted such a lot and didn’t even say ‘PLEASE’.

“I will do it Santa, I’ll get there in a trice!
I’ll go right now and see somehow if that child can be nice.”

“Thank you, Eric,” said Santa. “I’m sure there’s a good reason why that child wrote such a mean letter.”

Eric dashed off through his own little Elf Door, while the remaining elves wriggled and jiggled around Santa and Mrs Claus.

“Whatever is the matter?” asked Santa. “You are like a bucketful of tadpoles!”

One of the elves put up his hand and said:

“All day long we’ve peeped and spied. Now we need a rest!
May we have some fairy cakes? That’s what we love best!”

“I’m afraid I haven’t had time to make any fairy cakes,” said Mrs Claus sadly, “but if we are lucky and the magic works I should soon have my own fairy to help me and then you can have as many fairy cakes as you can eat! Till then you will have to make do with these…” 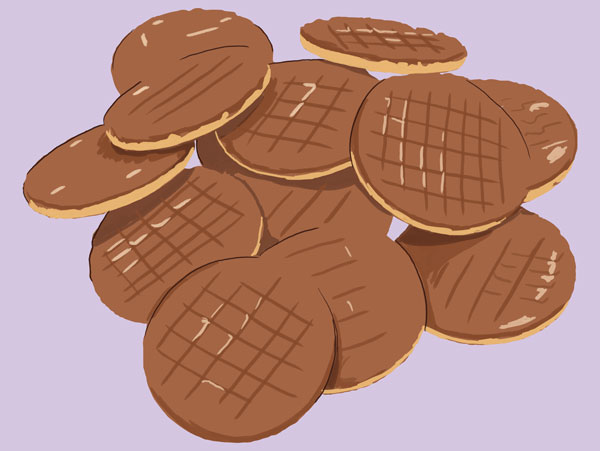 She reached into the pocket of her apron and pulled out a large packet of chocolate biscuits!

“Hooray!” cheered the elves as they shared the biscuits and hurried off to finish packing the rest of the Christmas presents.

“Now then Santa,” said Mrs Claus. “Let’s go into the kitchen and have some soup. And then you can have another little nap before you start delivering the presents – you need to keep your strength up!”