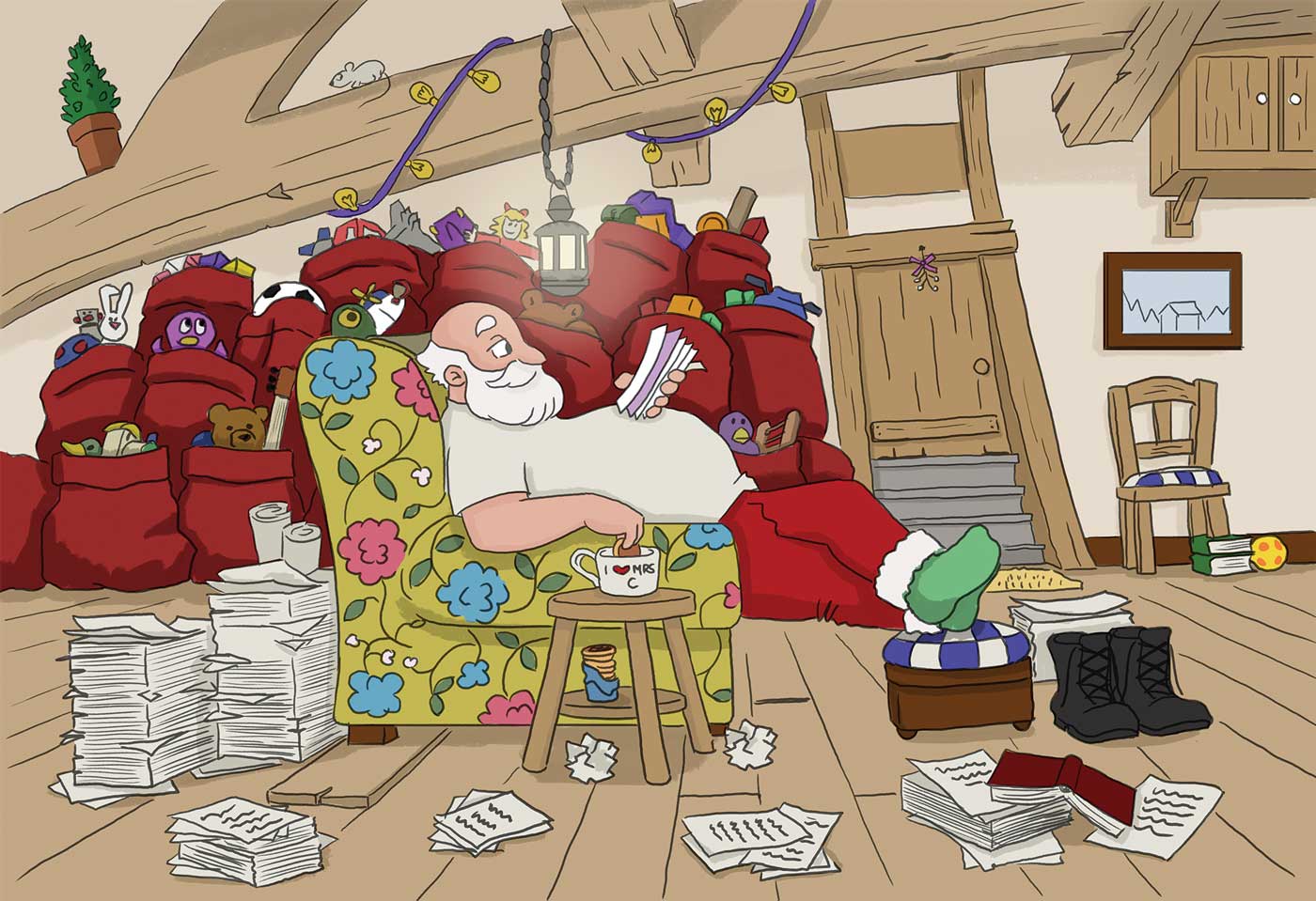 Santa Claus stamped his feet on the doormat and snow tumbled from his big black boots. It was Christmas Eve and outside the wind was whirling the snowflakes into drifts around the North Pole. Santa was glad to be back in his cosy workshop.

He had just finished feeding his reindeer and now he was looking forward to putting his feet up and having a cup of tea.

All around him were mountains of toys ready to be delivered to children all over the world. Soon the elves who helped him every year would finish wrapping the presents; then they would begin to load Santa’s sleigh but now they were out checking that all the boys and girls were being good and deserved their presents.

Santa Claus leaned back in his armchair and dunked a biscuit in his cup of tea. He picked up a huge pile of letters from children who had written to tell him what they would like for Christmas.

Dear Santa,
I have been very good all year and I would like a football so that I can play with my best friend.
xxxxx

“Ho, ho, ho!” chuckled Santa Claus. “That’s an easy request!” and he put the letter in a box marked “PRESENTS TO BE DELIVERED”. The next letter said:

Dear Santa,
I have been very good all year. Please will you bring me a toy baking set? I would like to make fairy cakes with my little sister.
xxxxx

“Ho, ho, ho!” smiled Santa Claus. “Another easy one! These children sound delightful!” and he put the letter in the same box. The next letter said:

Dear Santa,
Please may I have a Fairy Door for Christmas? I would love to have my own fairy and be able to write letters to the fairy and give the fairy a home. I have been very good all year.
xxxxx

“Ho, ho, ho!” laughed Santa Claus. “That’s not a problem. We have just received a delivery of Fairy Doors!” and he put the letter in the same box. The next letter said:

I want a lot of toys.
I want a bike and I WANT a load of chocolate AND I WANT MASSES OF sweets and I WANT HEAPS of money.

“That sounds rather greedy. I think I had better ask my elves to let me know about that child.” He put the letter into another box marked “INVESTIGATE”.

Santa Claus read a few more letters but the room was warm and his chair was very comfortable. He felt rather sleepy. “I’ll just have forty winks,” he thought and soon he was snoring and dreaming about his holidays. 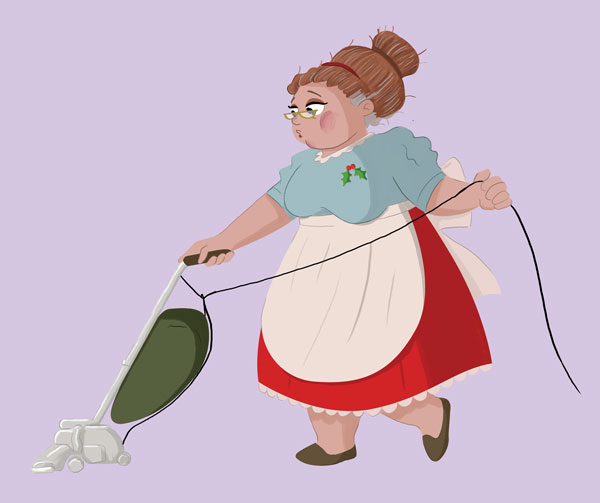 Suddenly the door flew open and in came the vacuum cleaner, closely followed by Mrs Claus!

“Now then Santa!” she shouted over the noise of the vacuum cleaner. “You can’t sit there dozing all day. I’ve got work to do and you are in my way! This workshop is so untidy!”

She switched off the vacuum cleaner and began dusting. She dusted the table; she dusted Santa’s chair; she even dusted Santa!

“STOP!” cried Santa as she polished his bald head! “Calm down dear! Sit down and I will make you a cup of tea.”

“There’s no time!” replied Mrs Claus. “I have too much work to do! I need help!”

“Wait a minute,” said Santa, scratching his shiny head. “I’ve had an idea. Why don’t we fix a Fairy Door in my workshop? All we have to do is leave the key, sprinkled with fairy dust, and see if a fairy will come to live with us. You could write a letter too and ask for help.”

“What a brilliant idea, Santa!” exclaimed Mrs Claus. “You are clever! Let’s do it right away!”