Their way back to the little town took them along the river bank past the Fairy Queen’s castle. Suddenly Rowena and Leila heard the sound of trumpets and they looked round to see the Fairy Queen coming out of the front door of the castle, surrounded by a group of fairies, elves and little animals. She was very beautiful, with long silver hair and dressed in a white gown trimmed with thistledown which sparkled as she moved. Her wings were silver and she wore a diamond crown. Leila curtseyed to the Queen and Rowena quickly copied her. “Who is this, Leila?” asked the Fairy Queen. “Your Majesty, this is Rowena who is visiting Fairyland today. She has been helping me to find a lost ladybird.” The Fairy Queen smiled kindly at Rowena. “That is very good of you, my dear” she said. “The creatures are very special to us and we love to take care of them. It makes us happy when children are kind to them too. I hope you will enjoy your time in Fairyland but I must say goodbye now because I am going to visit the fairies who live at the far side of my kingdom. I will be back at twilight to organise the preparation of the fairy dust. Perhaps you would like to help.” Rowena thanked the Fairy Queen and both she and Leila curtsied again as the Queen stepped gracefully onto the back of a lovely white swan which was floating on the river waiting for her. Some of her attendants climbed onto the backs of ducks and geese and the procession set off, gliding through the water while Leila, Rowena and the remaining fairies waved goodbye. The two little fairy girls were about to continue their journey to meet Crystal when a very odd noise made them look round in amazement. “Wheeeeeeeeeeeeeeeeeeeeeeeeeeeeeeeeeeeee!” they heard. The noise was coming from a fairy riding a bicycle at top speed down the hill towards the tower where the fairy dust was stored. Her feet were not on the pedals. Oh no! Her legs, in red and black stripy tights, stuck out on either side of the bicycle and her head was thrown back as she yelled with excitement. Her blond curls streamed behind her and her mouth was wide open. “This is funnnnnnn!” she shouted. “It’s Miranda the Mischievous Fairy!” sighed Leila. “Whatever is she doing now? She’ll have an accident if she isn’t careful.” Too late! The bicycle crashed into the fairy dust tower and Miranda was catapulted off and landed in the river with a splash! Leila and Rowena rushed to pull her out. “Are you hurt? You should have been wearing a cycle helmet” they exclaimed anxiously as the soggy little fairy stood dripping on the river bank, covered in weeds. “No, I’m fine. Don’t fuss!” replied Miranda. “That was such fun! I must have another go!” “But your wings are wet!” cried Leila. “You can’t fly till they have dried out!” “I don’t care” pouted Miranda. “I can go really fast on this bicycle and the breeze will dry my wings.” 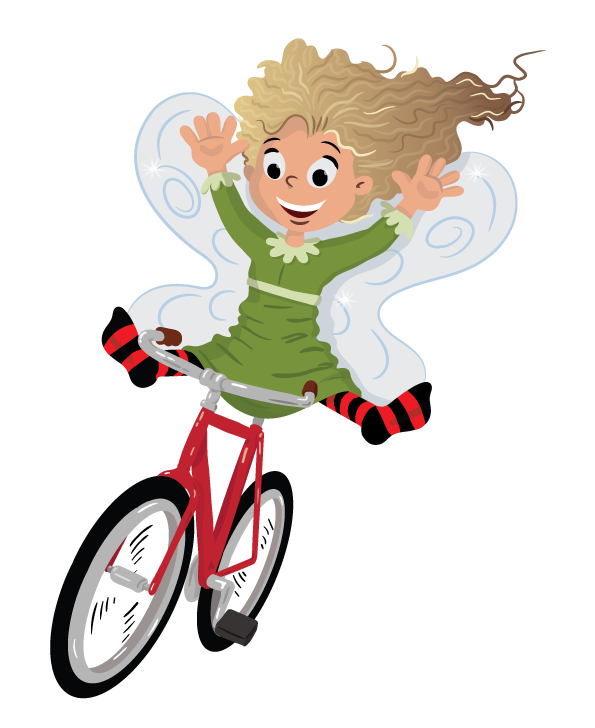 She turned to pick up the bicycle but what she saw then stopped her in her tracks. Where the bicycle had collided with the fairy dust tower there was now a large hole in the brickwork and the precious fairy dust was pouring out and blowing away on the breeze. “Oh jellywobbles!” she exclaimed. “Silly me!” And Miranda hopped onto the bicycle and pedalled away as fast as she could through the cloud of fairy dust. Rowena and Leila stared at the hole, then at the cloud of fairy dust. Whatever could they do? Without the fairy dust there would be no fairy magic!